Cargo claims are the most common and costly category of the P&I claims. Our analysis of the statistics over the past years (2013-2017) shows that almost 30% of all insured bulker, container and tanker vessels will suffer a cargo claim every year.

Costly cargo claims are often due to catastrophic circumstances occurring as the result of navigational claims – categorised as collisions, contact or groundings – often including the total loss of a vessel. Other expensive and common causes of cargo claims are inherent vice and improper cargo handling either on board, before loading or during discharge. 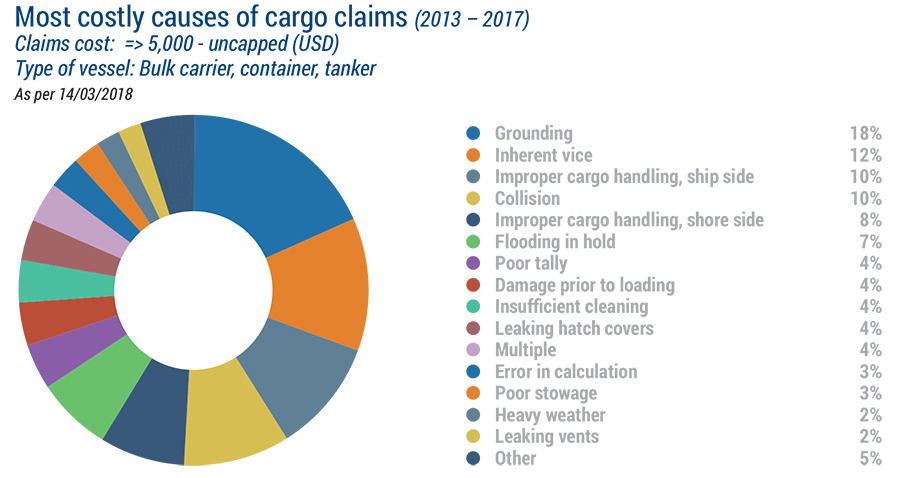 Inherent vice describes the state where a hidden defect or the very nature of the cargo itself is either the cause or a contributory factor in its deterioration or damage. In many cases the cargo can appear to be in proper condition when being loaded but circumstances during the voyage may cause damage to the cargo. For example it is not uncommon that, should discharge be delayed in port, especially sensitive cargo such as bananas and soybeans can be damaged because the cargo becomes ripe or heated up. This emphasises the importance of following proper testing procedures to ensure that cargo is within specification before loading.

Errors in calculation and poor tally are frequent causes of bulk cargo disputes between the shipowner and cargo receiver. Whilst they are fairly common, they are not usually particularly expensive.

Improper cargo handling on board the ship

Disputes between the cargo owner and shipowner are commonly caused by improper cargo handling on board the ship. This is caused by damage which most likely happened during the voyage. The most common causes are:

Improper cargo handling on the shore side

Disputes between the cargo owner and shipowner can also be caused by improper cargo handling on the shore side. These are claims where the damage has occurred before the cargo is loaded on the vessel or during the discharge or loading operation. The most common claims are:

Download the Report Wet Damage on Bulk Carriers 2018 »
Download Fire! A guide to the causes and prevention of cargo fires »