The Monthly Safety Scenario (MSS) is a Loss Prevention initiative to assist members in their efforts to comply with international safety regulations and to follow best practice.

The Club is publishing, on a monthly basis, a new Monthly Safety Scenario (MSS) to assist owners in their efforts of complying with the above regulations. Alternative scenarios will be uploaded in SCOL. It is easy to download the MSS and enter the written conclusions from the meeting and send feedback to the shore-based organisation.

Right-click on the link below and select “Save target as...“ to save the pdf file on your computer.

MSS Case November - Contact with a crane during berthing 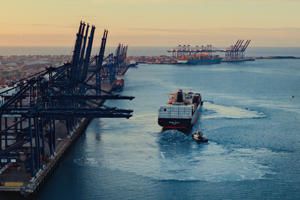 It was evening and the vessel was berthing. It was clear skies and the wind was coming in on the vessel’s port quarter with a speed of 14 knots. The vessel was lining up for berthing starboard side with two tugs assisting in the manoeuvre. One tug made fast forward and the other on the aft port side. A crane had been positioned just in front of the vessel.

Shortly before impact, the master was informed by the officer on the bow that the bow was closing fast towards the crane. The master tried to stop bow movement by putting the thruster hard to port but contact with the crane could not be avoided.

Read more about why it is important that the pilot is communicating in the same language as the captain in the latest monthly safety scenario case.

Under the ISM requirement owners are obliged to carry out monthly safety meetings or safety committee meetings onboard their vessels. This obligation stems from Chapter 5 of the ISM Code: “Master’s responsibility and authority” and furthermore from “5.1.2, motivating the crew in the observation of that policy”.

The obligation can also be derived from the Code of “Safe Working Practices for Merchant Seamen”, where it is stated that the safety committee should meet regularly: “3.13.2, The frequency of meetings will be determined by circumstances but as a general guideline, the committee should meet about every 4-6 weeks”.