Cargo claims are the most common and costly category of P&I claims. Our analysis of the statistics over the past years (2016-2020) shows that 20% of all insured bulk and general cargo vessels suffer a cargo claim a year.

Most common type of claim

Most common type of cargo involved 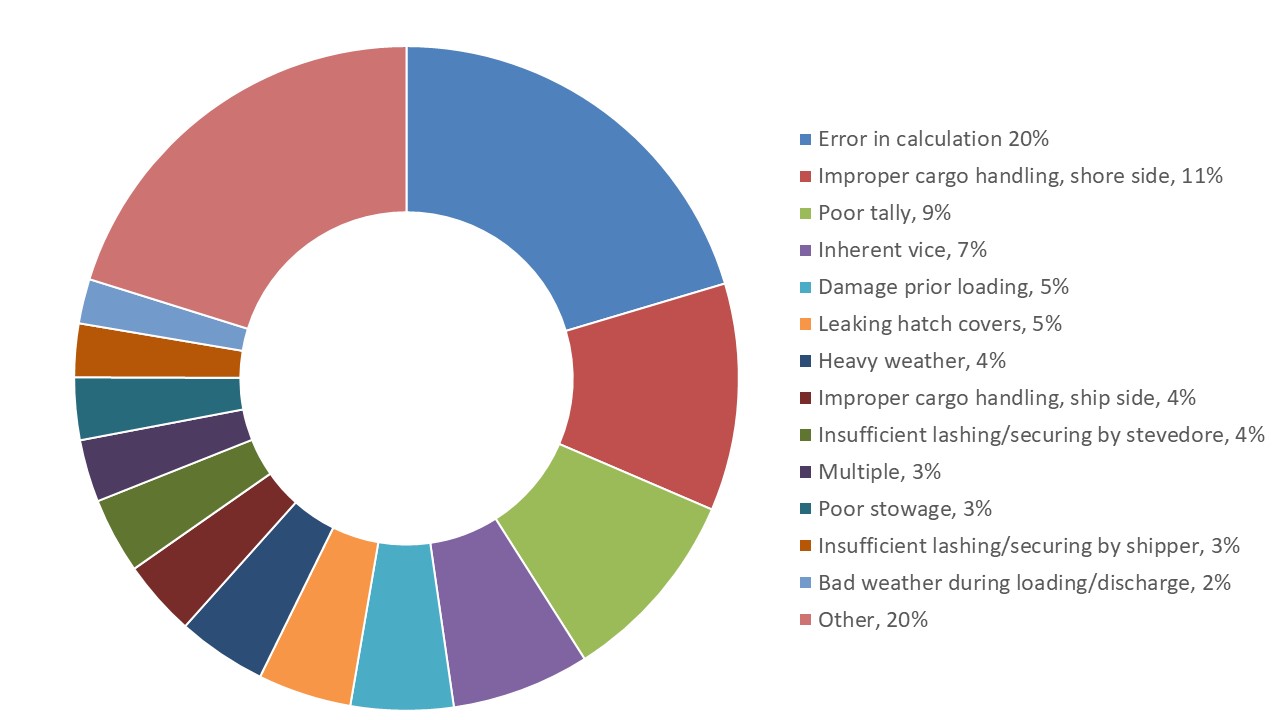 A majority of the claims suffered by bulkers are shortage claims. These are commonly caused by an error in calculation or, for bagged cargo, poor tallying. The main part of the physical damage claims concern various types of steel products and are often caused by improper cargo handling on the shoreside or insufficient lashing/securing of the cargo.

Wet damage is also a common type of claim for bulkers. Many types of bulk cargoes, such as agricultural products and steel products, suffer damage if exposed to water. Most of the wet damage claims occur during voyages because of leaking cargo hatches or accidental flooding of the cargo holds. Wet damage claims also arise during cargo operations when the cargo hatches are not closed in time when it starts raining.

Inherent vice is the cause of 7% of the claims. Inherent vice describes the state where a hidden defect, or the very nature of the cargo itself, is either the cause or a contributory factor in its deterioration or damage. In many cases, the cargo can appear to be in proper condition when being loaded but circumstances during the voyage may cause damage to the cargo. For example, it is not unusual that, should discharge be delayed in port, especially sensitive cargo such as soya beans can be damaged because the cargo starts heating up. This emphasises the importance of following proper testing procedures to ensure that cargo is within specification before loading.

The IMO, in CCC.1/Circ.2/Rev.1 dated 20 September 2017, introduced a new category of bauxite cargo, known as ‘bauxite fines’ in Group A of the IMSBC Code. Bauxite fines are a particular type of fine-particulate bauxite that are liable to liquefy or experience dynamic separation. The recommendations in CCC.1/Circ.2/Rev 1 were adopted as IMO Resolution MSC.462(101) and came into force on 1 January 2021. Read the full advice here

The loading, carriage and discharge of bulk grain and oilseed cargoes present numerous challenges. This advice highlights the main areas to consider when carrying bulk grain and oilseed cargoes. One of the most effective defences against cargo claims is the maintenance of clear and accurate records and documentation of each stage of the voyage from loading through to discharge. The crew can assist by maintaining detailed and accurate logs and obtaining photographs throughout the voyage. Access the full advice on SCOL

One of the most common sources of cargo claims is the bagged rice trade from Asia to West Africa. The top three rice exporters are India, Thailand and Vietnam. Bagged rice cargoes from all Asian rice exporting nations are often subject to claims at discharge. This is partly due to the inherent risk of condensation associated with the voyage route. Access the full advice on SCOL

The loading, carriage and discharge of bulk soya bean cargoes can present numerous challenges. This advice highlights the main areas to consider when carrying bulk soya bean cargoes. The global trade of soya beans has undergone continued expansion in recent times in part due to the increasing demand in China, the largest soya bean importer, for animal feed. The largest soya bean exporters are Brazil and the USA who account for approximately 80% of the global export market. Access the full advice on SCOL

Steel shipments typically involve substantial tonnages, with steel products often the sole cargo on the voyage. Steel shipments can involve a multiplicity of product types on the same voyage and may load from more than one port. All steel will rust in the presence of water. Seawater wetting is particularly damaging with a rate of steel oxidation some 10 times higher than from freshwater alone. Access the full advice on SCOL

The preparation and cleaning of a vessel's cargo hold for the next intended cargo is a vital part of bulk carrier operations. Hold cleaning requires clear planning, preparation and efficient execution. Failure to carry out the proper hold preparation prior to loading can lead to cargo claims relating to cargo contamination, overflowing bilges as well as contractual claims relating to delay, failed surveys, loss of hire and further Charterparty disputes. Access the full advice on SCOL

The report, which has been prepared in conjunction with DNV GL and MacGregor, identifies heavy weather and leaking hatch covers as both the most common and most costly type of wet damage claim. Download the full report

Fire! A guide to the causes and prevention of cargo fires

When a fire breaks out onboard a vessel there is no fire service ready to help in extinguishing it – it is up to the crew themselves. The consequences can be catastrophic, and all those who have worked onboard a vessel are aware of the difficulties involved with managing fire and the crucial importance of fire prevention. The information in this handbook is designed to assist shipowners and crews in those fire prevention efforts.  Download the full handbook

The IG standard form Letter of Indemnity (LOI) wordings may be downloaded below:

Dealing with the issue of ship-shore discrepancies

Liquefaction: A jigsaw of variables

Notification requirements when carrying nickel ore from Indonesia and the Philippines